The resumption of classical plays at the Greek Theatre of Syracuse after the Great War and the Spanish epidemic.

Resurrected from the silence of the archives, a series of period photographs by the Syracusan Angelo Maltese (1896-1978), reproduces the performance of Aeschylus’ Libation Bearers, staged in 1921 for the resumption of classical plays at the Greek Theater of Syracuse, which took place after an interruption of seven years from the first season in 1914, due to the Great War and the Spanish flu epidemic.

They are black and white photos reproducing an historical show through the actors of the Varini-Berti-Masi company, the poses of the Libation bearers, with the choruses entrusted to the young girls of Syracuse, the images of the sets and the costumes by Duilio Cambellotti. They testify to an extraordinary venture born from the energy and the farsightedness of a group of patrons of Syracuse gathered around the brothers Filippo and Mario Tommaso Gargallo from Castel Lentini, who personally contributed to the rebirth of the Greek Theatre and to the production of shows en plein air among the ruins of the famous monument of the VII century B.C., carved in the limestone rock of the Temenite hill.

Starting from this collection of photographs, the National Institute of Ancient Drama Foundation has set up a multimedia exhibition, to remember the birth of an institution now over a hundred years old and the Optimates who made it possible.

The first section is dedicated to the protagonists of the venture: Count Mario Tommaso Gargallo from Castel Lentini; the archaeologist Paolo Orsi; the Greek scholar Ettore Romagnoli, who was  the artistic director of the classical plays at the Greek Theatre until 1928; the composer Giuseppe Mulè, author of the music and of the choruses of the Libation bearers, inspired to the Greek nòmoi that had survived according to Alberto Favara in the Sicilian popular songs; the artist Duilio Cambellotti, author of the scenographies and of the costumes. A special attention is dedicated to the production of the show of one hundred years ago that involved the teachers and the students of the local School of Art applied to the industry for the execution of the sketches of Cambellotti, the tailors and the costume designers as Manrico Bonetti from Padova, and the actors of the Company Varini-Berti-Masi. 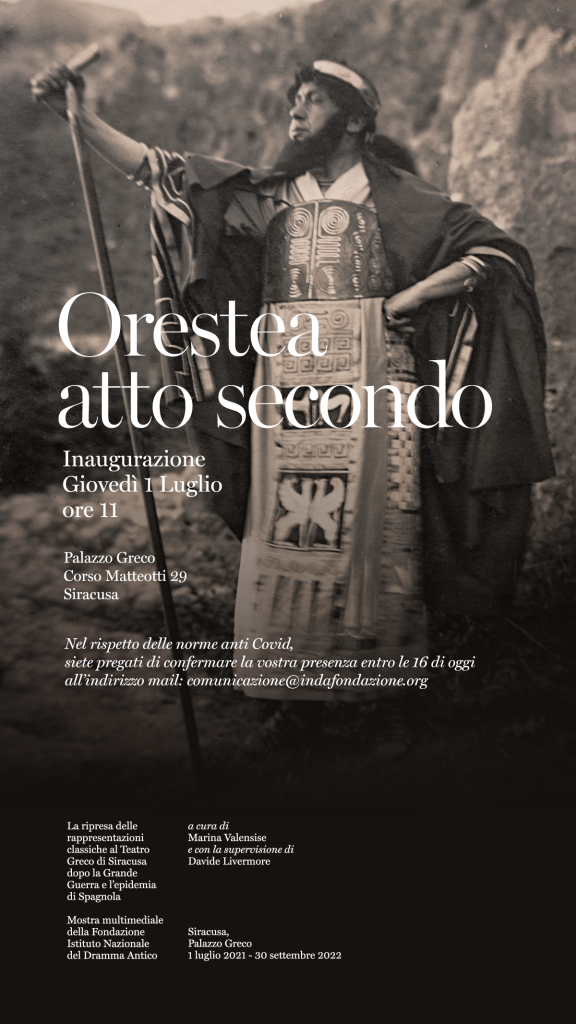 In the second section we find the display of sixty black and white photographs on three panels  reproducing the scenes and the prominent moments of the second act of the Oresteia, each accompanied by the translation of Aeschylus’ verses to which they refer, in the version in endecasyllables by Ettore Romagnoli prepared for the 1921 production.

The exhibition path ends with “Spazio del Tempo” (Space of Time), in the setting conceived and realized by Carmelo Iocolano, where visitors can immerse themselves in the atmosphere of the Greek Theatre of a hundred years ago. On a 180 degrees screen they will watch a video by Alain Parroni, that thanks to augmented reality puts Angelo Maltese’s images in motion, restores the color to Duilio Cambellotti’s scenes and costumes, gives voice to the interpreters with the recording  of Aeschylus’s verses translated by Romagnoli, and of the music and choruses by Giuseppe Mulè, interpreted by students and teachers of the Academy of Art of Ancient Drama, under the direction of master Marco Podda.

The set-up of the exhibition has been supervised by Davide Livermore.

The exhibition will be inaugurated on July 1st, 2021 and will remain open to the public until September 30th, 2022, before starting its national and international circuit. The exhibition catalog is published by Electa. 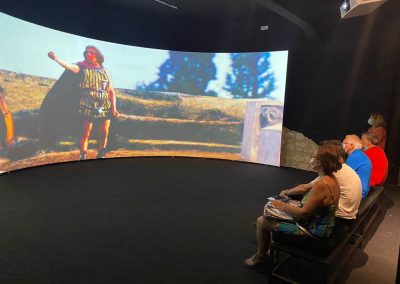 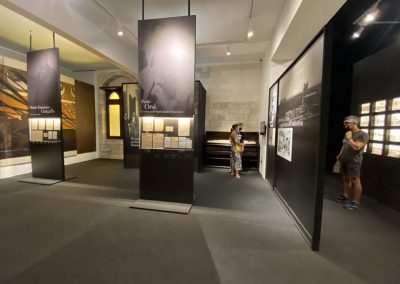 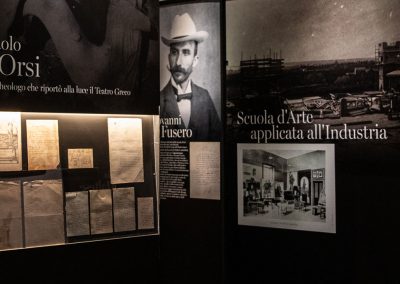 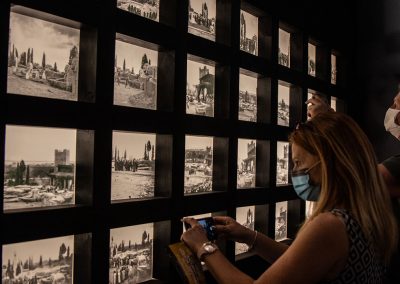 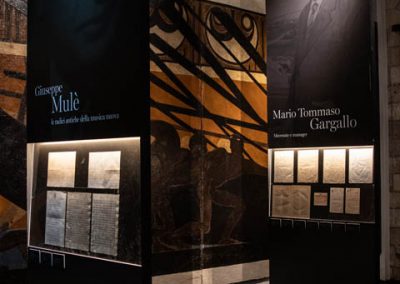 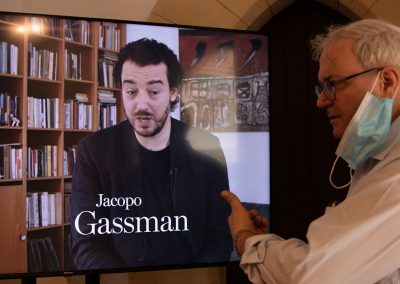 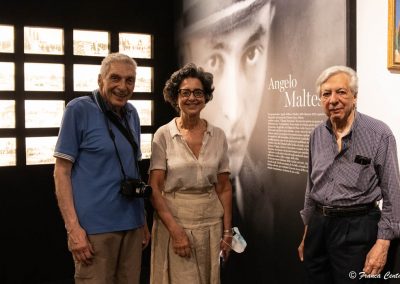 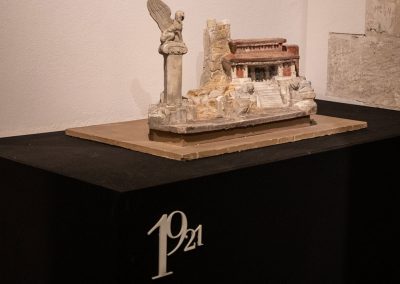 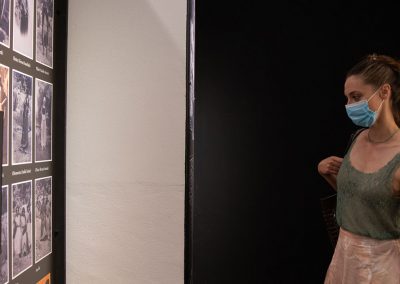 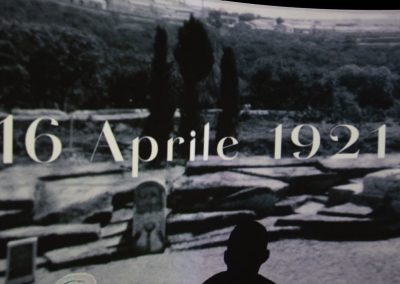 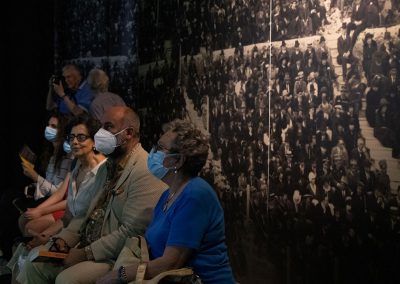 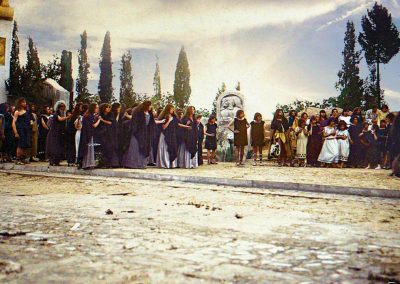 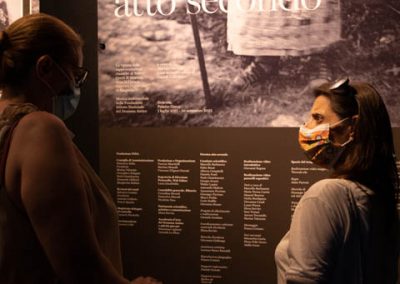 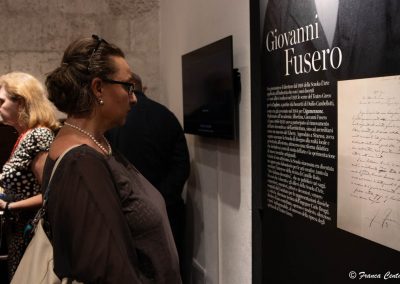